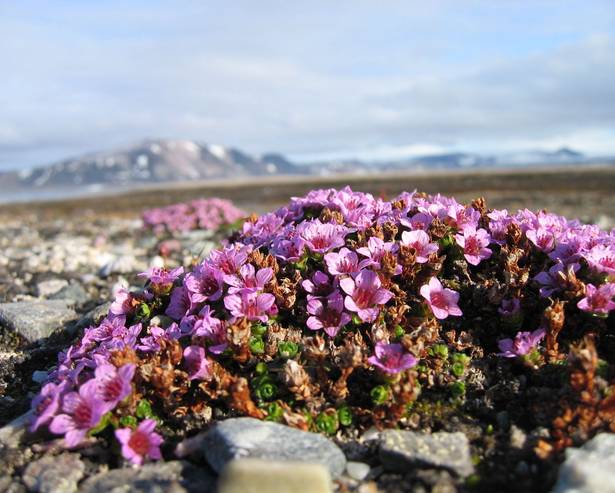 There are plenty of hardy perennials around. Lily of the valley, hostas and bleeding hearts are all great for gardens in chilly climates. But what's the hardiest plant in the world? If you ever move to the Arctic circle or find yourself stuck in an ice age, which flower should you plant first?

Purple Saxifrage, the Hardiest Plant in the World 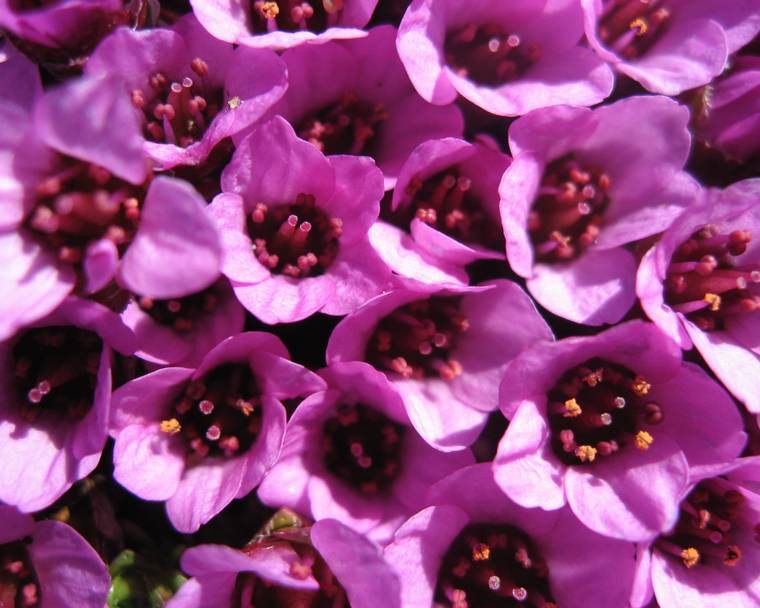 Image by Kim Hansen (CC BY-SA 3.0)
With its pretty purple flowers carpeting the tundra in spring, purple saxifrage looks a bit delicate. It certainly doesn't look like it could take much of a beating. Yet it's common throughout the Arctic and grows further north than any other flowering plant.

The consonant-filled Kaffeklubben Island off the coast of Greenland lies at over 83 degrees north, closer to the Pole than any other land on Earth. It's a small, desolate island made of permafrost and gravel whose summers only last for around a month. It spends most of the year covered in snow and surrounded by frozen sea ice. The conditions are almost impossibly harsh but, as Jeff Goldblum said in Jurassic Park, "Life, uh... finds a way."

Alongside the Arctic poppy, purple saxifrage manages to grow on this inhospitable oceanic lump. It thrives where most living things would curl up and die.
Purple saxifrage also holds the record for the highest flowering plant ever found in Europe. It was found growing close to the summit of the Dom in Switzerland, the third highest mountain in the Alps at 4,545m. At these elevations, even the roots are exposed to sub-zero temperatures every night, and Winter temperatures can plunge to -20C. 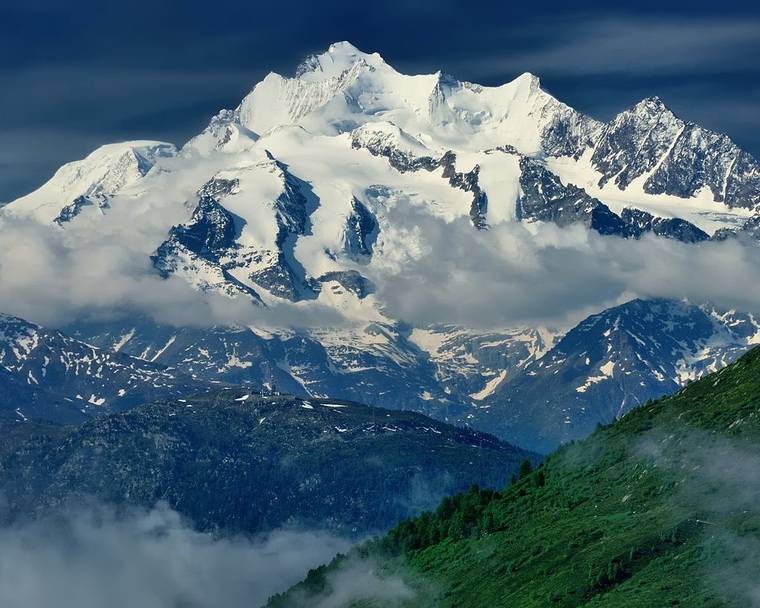 Dom mountain in Switzerland – not where you'd expect to find a flowering plant! Image by Zacharie Grossen (CC BY-SA 3.0)
So how can the delicate little purple saxifrage survive such extremes?
Need to identify a plant? Download Candide to get instant Plant ID

Purple saxifrage has evolved an impressive range of adaptations to cope with its harsh environment. While extreme temperatures make life difficult, the wind can be even worse. There's no point shrugging off the cold if you get blown away the moment you poke your head through the soil.
Violent windstorms rage across the tundra, so purple saxifrage tends to grow in dense mats on, or between, rocks. This extra shelter from coarse wind-blown sand and gravel can make all the difference. 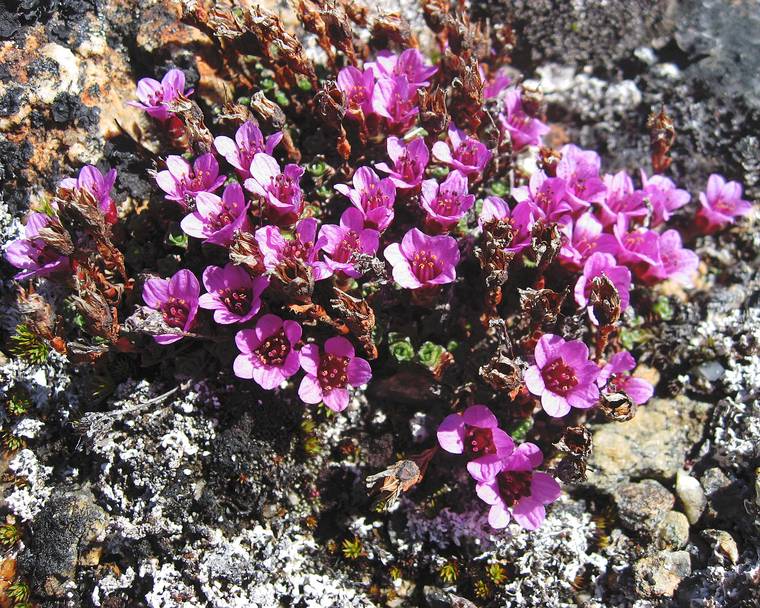 Purple saxifrage anchored to a rock. Image by Kim Hansen (CC BY-SA 3.0)
Purple saxifrage also grows low and slow. With a maximum height of five centimetres, it grows outwards rather than upwards. And it does so at a glacial pace; a 20cm wide plant is likely to be a few decades old. This gives the long tap root time to delve deep enough to anchor the plant in the unhelpfully thin soil.
In areas with lots of limestone, purple saxifrage plants extrude tiny pieces of calcium carbonate. This mineral shield helps protect the plants against the fierce winds and intense solar radiation. 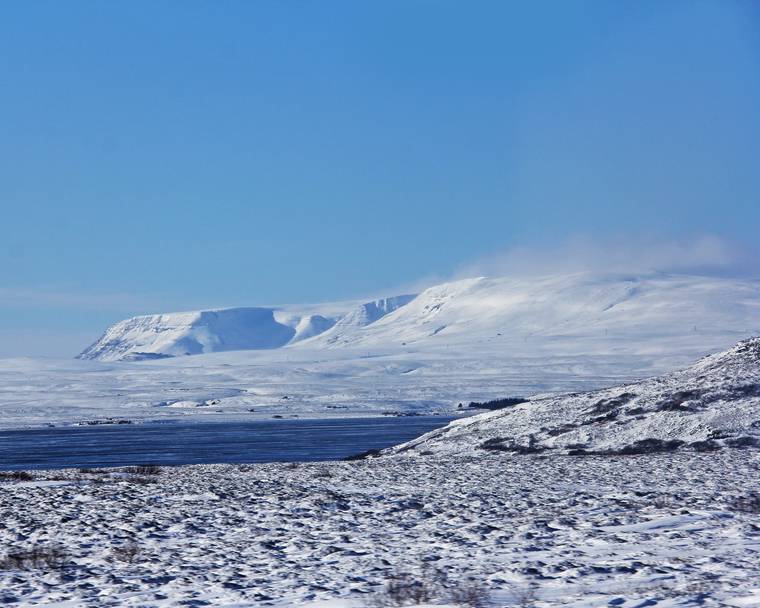 The Arctic tundra isn't an easy place to spend the winter

Surviving months of freezing temperatures requires another set of adaptations. Woody branches make purple saxifrage more frost-resistant. The leaves are unusual too. They're tiny, fleshy, and overlap like scales to form a protective barrier against the cold. These leaves even have hairs around their edges that trap air pockets to keep in the warmth.

Reproduction is rarely straightforward, and purple saxifrage has it harder than most. The snow isn't gone for long; the flowering season is short and pollinating insects are often scarce or inactive. 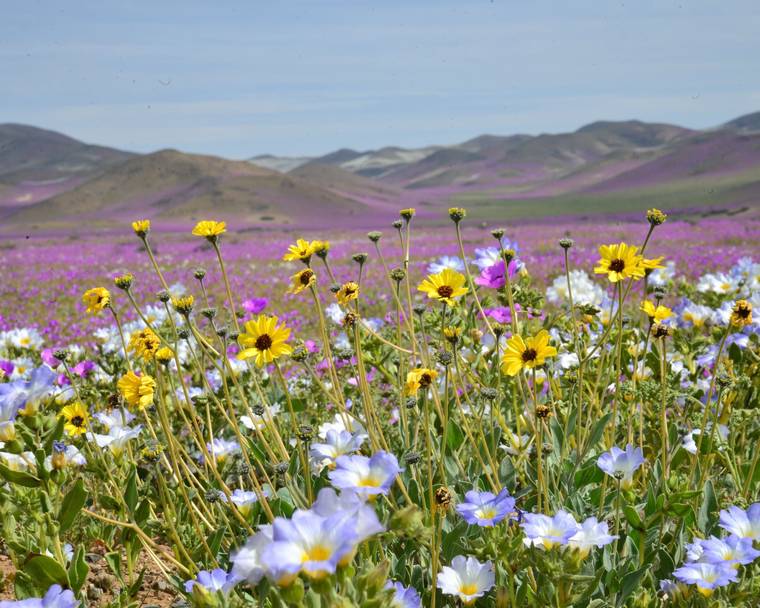 Spring in the Arctic is beautiful, but it never lasts long
But the purple saxifrage's flowers have a trick up their sleeves. Rather than developing in the spring, the buds grow until they're ready to bloom just before the first snows arrive. They're protected through the brutal winter by a shield of foliage, enabling the flowers to bloom a few days after the snow melts.
Purple saxifrage can also self-pollinate if no insects are around. It's not an ideal long-term solution, so the stigma (the female parts of the flower) mature first. The anthers (the male parts) follow suit a few days later if no pollinating insects turned up in time. 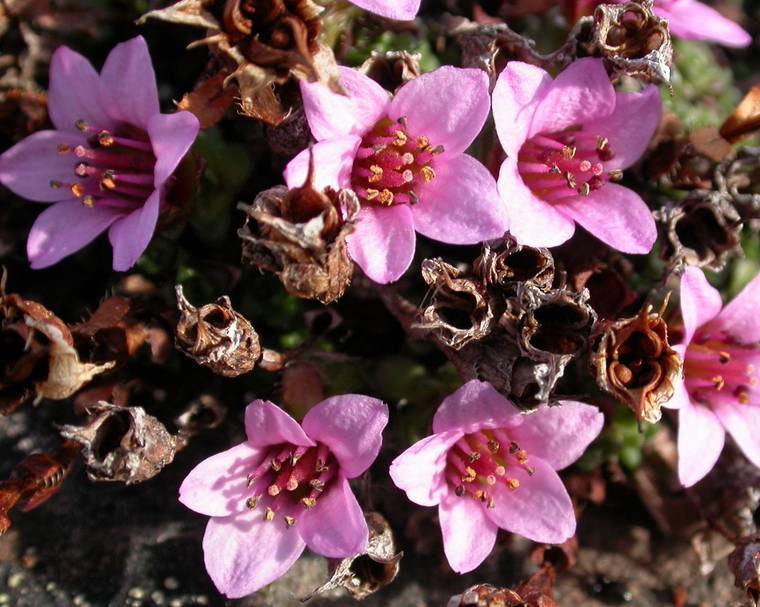 Purple saxifrage flowers. Image by Jamie McMillan (CC BY-NC-SA 2.0)
The seeds are finally released at the end of the short growing season. They tend to wait until snow already covers at least some of the ground. This ingenious adaptation makes it easier for the seeds to be blown far and wide across the frozen surface.

Purple saxifrage has always been an important plant for indigenous peoples. The Inuit use the plant to make yellow, green and cream dyes and eat its sweet-tasting petals, rich in vitamin C. They even used purple saxifrage as a handy calendar marker – when the purple blooms appeared, it meant the caribou would be calving too. 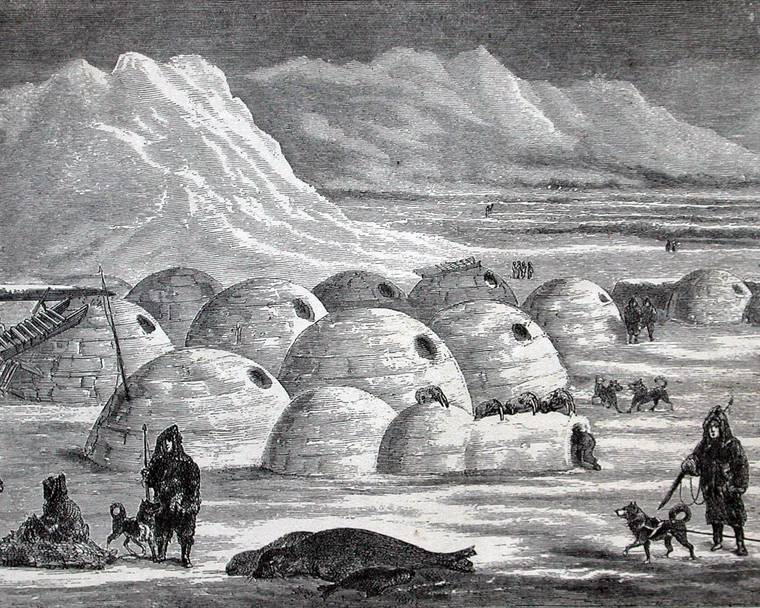 Purple saxifrage has always been important in Inuit culture
The genus name Saxifraga means "rock-breaker" in Latin. While this might refer to saxifrage breaking rocks apart over time, it's more likely a reference to their role in traditional medicine as a treatment for kidney stones. 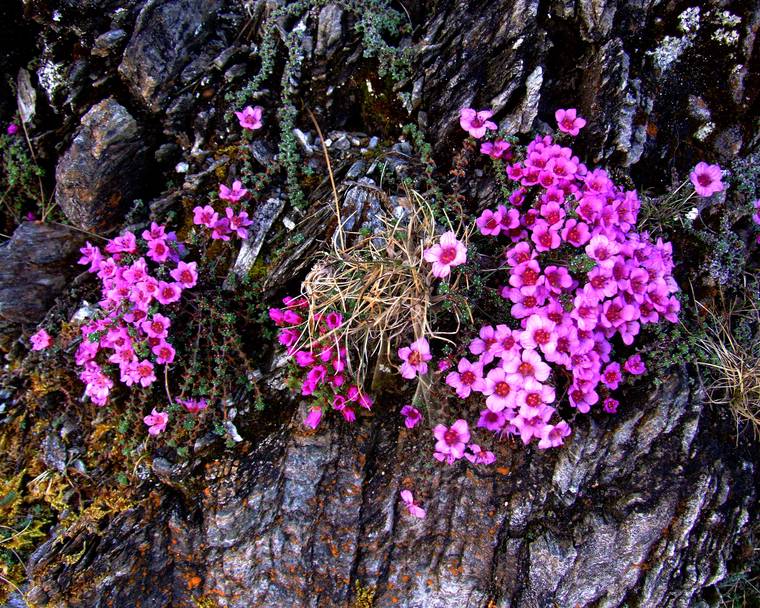 Purple saxifrage might not survive in the mountains forever. Image by nz_willowherb via Flickr (CC BY-NC 2.0)
Ironically, purple saxifrage's success could be its downfall. It's so well adapted to its high-altitude/high-latitude home that studies have shown it's unlikely to cope well with climate change. Polar and high-altitude regions are expected to change faster than most other areas. And as more plants move into these previously deadly environments, it seems purple saxifrage could well be tragically overwhelmed by the competition.
Image at top of page by Alastair Rae (CC BY-SA 2.0) 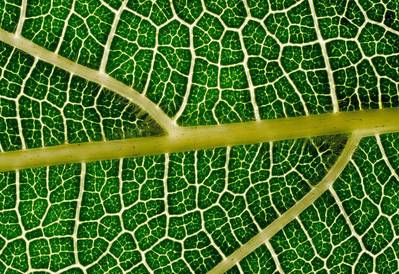 Why do Plants Have Leaf Veins?

We may not always realise it, but plants are dependent on veins, much like us. They can be as intricate as the skeletons of... 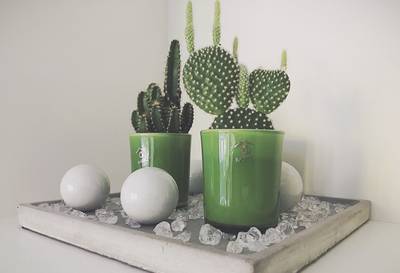 How To Look After Cacti

Cacti are more popular than ever at the moment. Charming, curious and near-indestructible, they are grown for their intriguing...

When it comes to cacti as houseplants, there’s an enormous range of species out there, but here we’ll look at some of the more...