New Exhibition in Birmingham Explores our Relationship With Nature 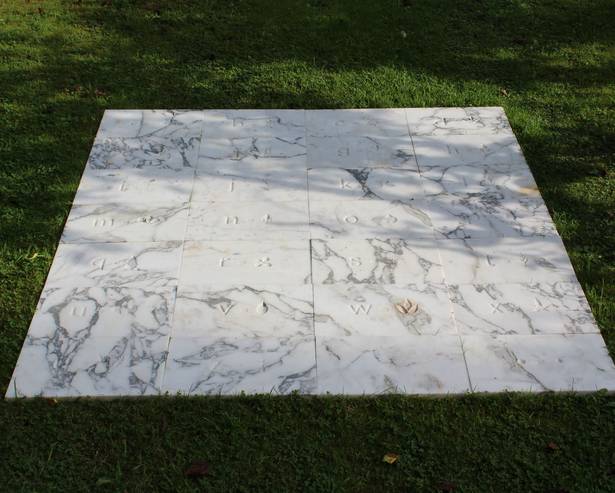 If you had the opportunity to write a letter to nature, what would you say? Ikon Gallery’s brand new exhibition explores exactly that and our relationship with the natural world.
The major showcase exemplifies Birmingham-born John Newling’s strong environmental proposition, while pushing the boundaries of what defines art. In March, visitors are invited to gain an exclusive insight into the artist’s concerns for our environment and the implications our actions are having on it.
Director of the Ikon Gallery, Jonathan Watkins says: ‘Nature is connected to everything. Art contributes other voices to a global conversation, but it certainly is not or should not be a privileged one.’
Download Candide to your phone to get your daily gardening news 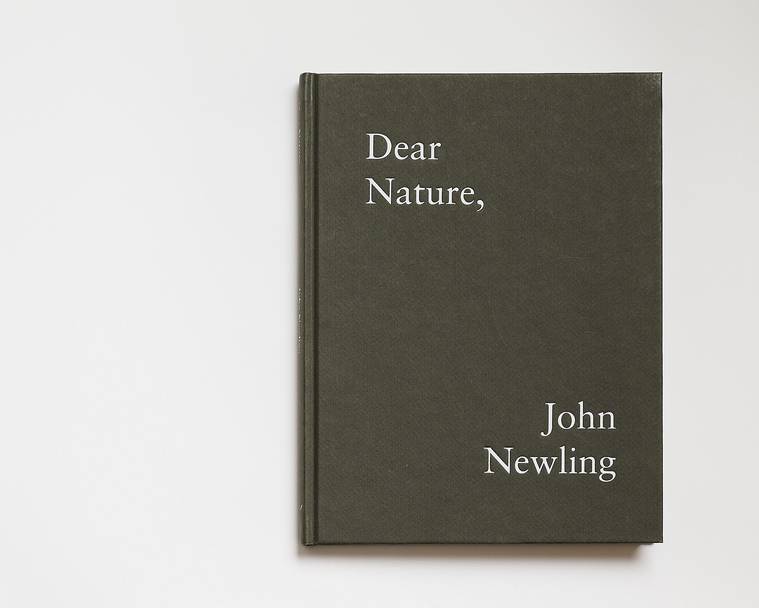 John Newling, Dear Nature (2018), Courtesy the artist.
At the heart of the exhibition is Dear Nature – a book published in 2018 – comprising of letters John wrote to nature every day for 81 days. Alongside his letters, audiences are treated to ‘a miracle of life’ – photographs of a growing flax seedling, cultivated in John’s own studio.
Earlier in his career, the 67-year-old worked with flax farmers in France who provided him with thousands of seeds sourced from India.
‘I came [home] and wanted to experience what they experience,’ he says, ‘so I converted my garden into a flax field and planted them, then studied them.
‘While I was doing that, I began to write the letters. With each letter, I pulled up a plant from the garden, pressed it and [put it in the book], so what you see is 81 days of a flax plant growing,’ he adds. 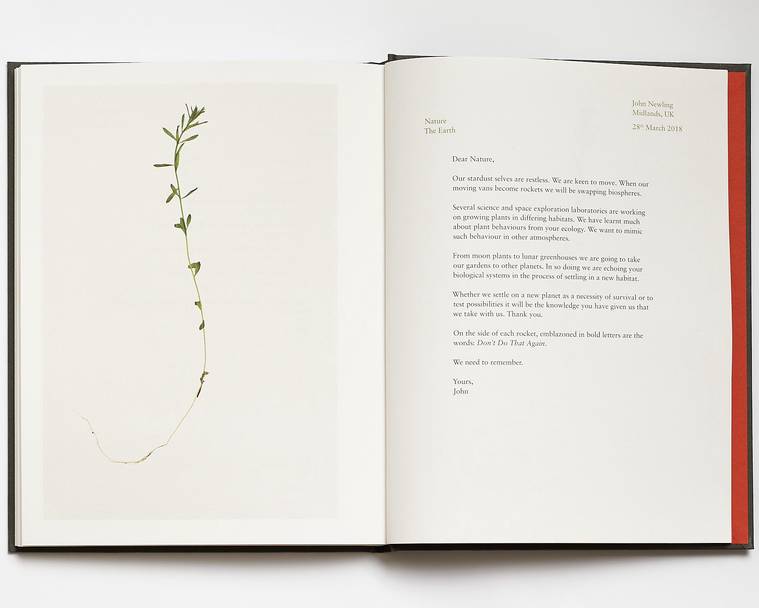 John explains that for almost three months he was ‘locked into writing the letters’ and the first thing he wrote was an apology to nature. But why 81 days? ‘That [applies] to a lot of my work,’ he claims, ‘there’s mathematics in a lot of it and nine by nine is 81, plus when I reached the last letter it felt like I had covered all the thoughts I had been having for years and the right time to stop.’
John is an artist who belongs to a generation that grew up with Conceptual Art, Land Art and Arte Povera in the 1960s. During his time in America in 1985, as the first recipient of a Fulbright fellowship in visual arts, he produced works of art in hotels, swimming pools, burnt out cars and on the streets of Los Angeles, San Francisco, Washington DC and New York. This experience marked the beginning of an interest in the meaning of ‘place’ for John.
‘I was trying to work out a way in which art can spread from the gallery into other spaces, where it has a different set of relationships to the space [it’s in] and the people experiencing it,’ he says.
‘I’m interested in the archeology and geology of place and how people refer to it. An example would be how we associate place with time. In a garden you are forced to slow down because that’s what nature does. Particularly in forests and walking through nature, your heartbeat improves and your whole sense of being is much more connected to the [earth].’
Living in a three storey house consisting of a lower floor studio space parallel to the garden, curiosity of the relationship between indoor and outdoor and the idea of repurposing waste has been constant for the gardener come artist. 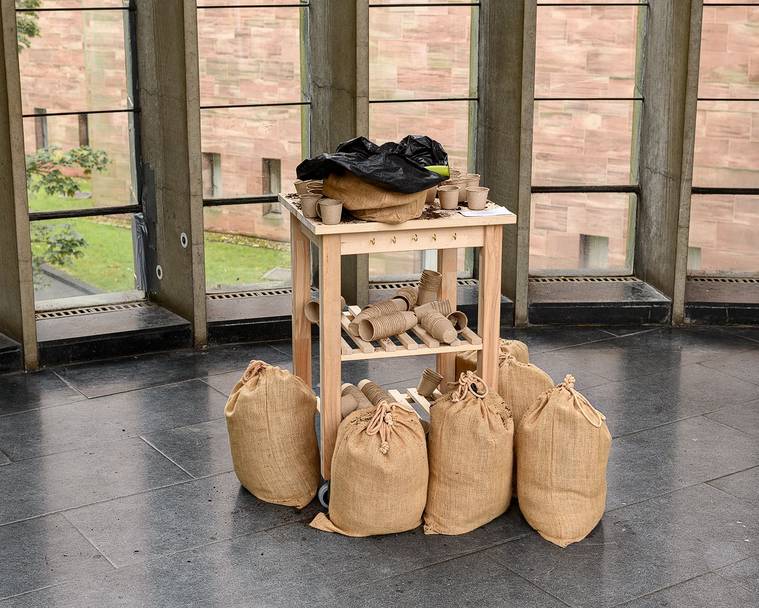 John Newling, Waste Land Soil (2018), Mixed media, Courtesy the artist.
In 2018, John produced Waste Land Soil which involved him shredding several hundred copies of T. S. Eliot’s poem The Waste Land, combined with coffee grounds and other kitchen scraps to make a soil that can sustain vegetative growth – thus the opposite of waste. In a reverse process, he used the soil to make paper for his Eliot’s Note Books (2017), 434 paper sheets reflecting the 434 lines in Eliot’s poem that, if placed in the earth, would grow and sustain life.
A further work Soil Books (2019), involves the artist creating books made with soil from his garden to embody the idea of the Anthropocene – our current geological age in which human impact is evident. The Soil Books are sculptures, derived from John’s everyday experience of walking from his house into his back garden, picking up leaves along the way. The result is book-like stacks of panels of processed soil with the leaves, pressed and gilded, on the surfaces which are then stained with watercolour. The order of the books is crucial, indicating seasonal change. 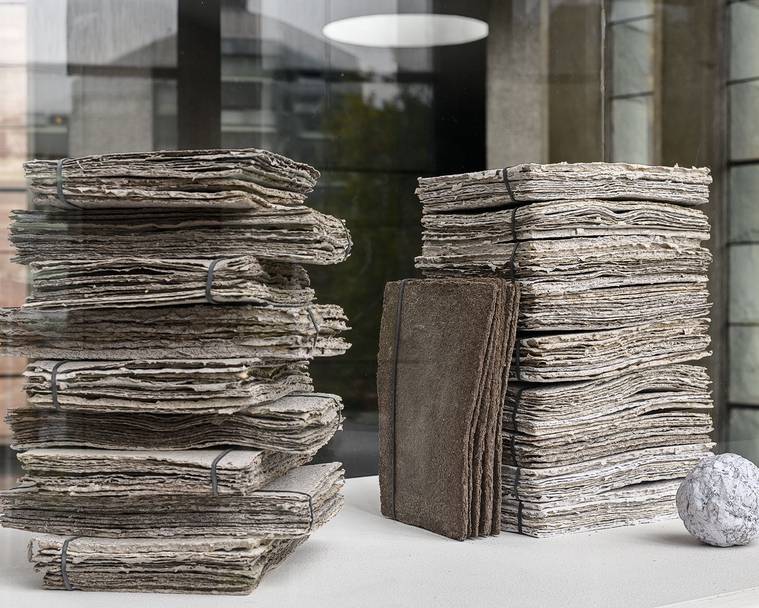 John Newling, Eliot's Note Books (2017), Mixed media, Courtesy the artist.
John believes more people should consider our environmental impact, something which he hopes to encourage through his work.
‘We need to slow down and enjoy the wonder of [the natural world]. If we forget about that and plough on with arrogance and concede, then we are in terrible trouble. We have to change.’
He hopes visitors to his exhibition will leave with a greater sense of connectedness to the earth and human inventiveness as well as having seen extraordinary things not seen before.
Meanwhile, Jonathan Watkins urges gardeners among others to visit the exhibition.
‘John is one of them,’ he exclaims, ‘to paraphrase Voltaire, I like the way John cultivates his own garden – literally! He is refreshingly unpretentious with his ecological proposition.’
Watch Dear Nature by John Newling on YouTube
The exhibition extends beyond the gallery space, with readings of Dear Nature resounding throughout Ikon’s staircase and further works sited nearby in the cherry trees in Oozells Square, Brindleyplace.
Ikon is holding a live reading of Dear Nature by John Newling as part of the Launch Night. The exhibition will run from 4 March – 31 May 2020. Find out more.
Free download for your phone or tablet

If your apple or pear tree hasn't been pruned for a while, then you may need to do renovating cuts.

Plant: Save stacks on shop-bought garlic by sowing your own bulbs. Break into cloves, make a shallow hole and drop in a clove...