A rare pink grasshopper has been spotted in Northumberland.
Pink grasshoppers, a mutated variation of the meadow grasshopper, Chorthippus parallelus, may look fake, but since being spotted by one of our users, we decided to find out more about these rosy insects. 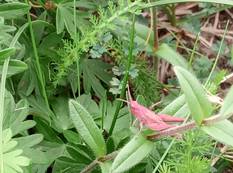 Found this lovely little pink grasshopper in the sand dunes over the weekend. Never seen one like this before.

The meadow grasshopper thrives in damp and unimproved pastures throughout Europe and parts of Asia. The only flightless grasshopper in the UK, they have no hindwings, they undergo a series of moults, from the nymphs when they hatch in April, to fully formed adults in June. 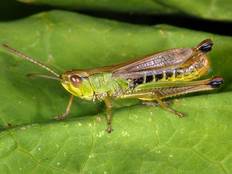 The most common form of are either green or brown, however reddish and purple-red forms have also been recorded.
Download the free Candide App to get help and answers from a warm community of gardeners

Why are they pink?

The pink colour in these animals is a form of erythrism, an unusual reddish pigmentation of the skin which is caused by a genetic mutation, similar to the one which causes albinism.
It has been spotted in grasshoppers, and also katydids, where it may be a dominant genetic feature.
In other non-insect species, reddish colouration can be caused by the inclusion of pigmented foods in the diet. For example, flamingos get their recognisable colouration from the algae that they eat.
Researchers believe that this trait may have evolved to help some members of the species to survive on plants with red leaves, via camouflage. However, most plants are green. So the pink tint can be a very unadvantageous trait in many habitats.
This is because, as eye-catching as this insect is, it's not only our eyes that they catch. The bright pink on a green backdrop makes them more susceptible to being picked off by sharp-eyed birds.
Predation may be one of the reasons that we don't see them all that often, and why most pink grasshoppers appear to be nymphs. Many will not survive to the adult form.

A poor pink grasshopper - struck down in its prime by a blue winged pitta.

If you've spotted any unusual wildlife, please share your picture with the tag #weirdwildlife.

The recently recruited garden water scientists will be trialling ten different watering techniques to get the best-looking...

Shed of the Year and Greenwich Park

Voting for the annual Shed of the Year competition has opened.