Spotters Needed as Extinct Giant Moth Reappears in the UK

Hero Image - Butterfly Conservation/Andrew Cooper
There have been numerous sightings of a moth thought to be extinct in the UK since the 1960s, suggesting that it may be breeding across southern Britain.
The Blue Underwing (or Clifden Nonpareil - 'beyond compare') has a wingspan that can reach 12cm and a bright blue stripe across its black hindwings. It is regarded as somewhat of a holy grail among moth enthusiasts. 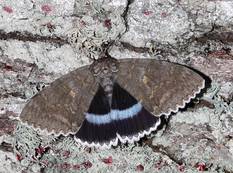 The Blue Underwing went extinct in the UK in the 1960s.
People are being asked to look for this moth and record any sightings as part of the annual Moth Night, an event run every year by Atropos, Butterfly Conservation and the Centre for Ecology & Hydrology.
This year the event celebrates its 20th anniversary and runs for three consecutive nights from the 26th until the 28th. Members of the public can submit their sightings on the website, and events are being held across the country to raise awareness of moths.
Scientists are also hoping to use Moth Night to learn more about the Convolvulus Hawk-moth. This is another migrant species, with an unusually long proboscis (tongue), allowing it to feed on tubular flowers. 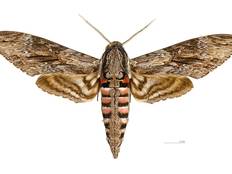 Butterfly Conservation / Keith Baldie
Richard Fox, Associate Director of Recording and Research at Butterfly Conservation said: 'Moth Night is a wonderful opportunity to get face-to-face with the UK’s magnificent moths including, if you are really lucky, the Clifden Nonpareil, and to contribute important data.
'The Clifden Nonpareil is a fantastic addition to our wildlife, and it is great to know that it is resident again in the UK, after an absence of 40 years or so. Its caterpillars feed unnoticed up in the canopies of Aspen and poplar trees, so the adult moths are the best indication of how widely-established this species now is.
'This year, the Clifden Nonpareil is turning up all over southern Britain, in the Midlands, East Anglia and Wales, in Ceredigion and Monmouthshire, as well as in south coast counties. There’s never been a better chance of a thrilling encounter with this impressive insect.'

The Convolvulus Hawk-moth. Image: Butterfly Conservation / Andy Crory
Moth Night founder and editor of Atropos, Mark Tunmore, said: 'September is a special time for studying moths in the British Isles with a colourful range of resident species mixing with more exotic species from Europe or even North Africa.
'When we started Moth Night 20 years ago, this moth (Clifden Nonpareil) was a very rare immigrant, but it is now becoming familiar to moth enthusiasts across southern Britain. This illustrates just how quickly change can take place, and that’s why moths are such a fascinating group of insects to study.
'Coming at the peak of the Clifden Nonpareil season, Moth Night 2019 is a fantastic opportunity to map the current range of this species in Britain.'

Find out more about how you can get involved in Moth Night 2019.

Hedgehogs have captured the hearts of the public, but their population is facing a worrying decline. Following the loss of...

Ellen Mary and the New Era of Garden Influencers

One of Grow Your Own Magazine'sTop 5 Women Influencers in Horticulture, she hosts a gardening podcast, gardening radio show...

Christmas Trees and Brexit: What To Expect for the Rest of the Year

Every year garden shows across the country dominate what we are buying for our garden (or wishing we were).