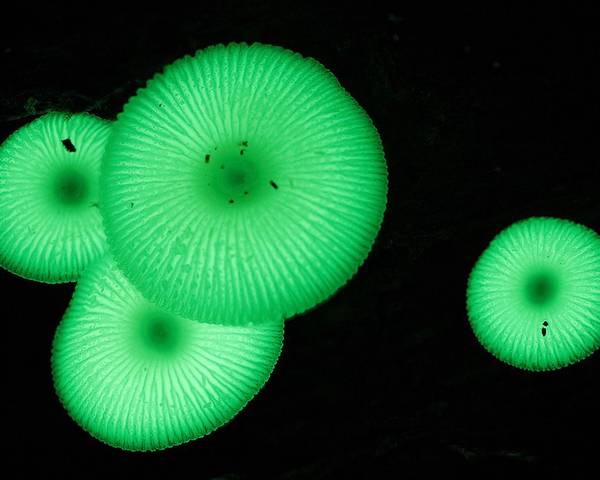 Mycena chlorophos is a fungus with some pretty cool traits. For some background, it's a mushroom that originates from sub-tropical Asia. Japan, Taiwan, Polynesia, Indonesia, and Sri Lanka, and Australia and Brazil are just a few of the locations where the fungus has been observed growing. When fruiting, M. Chlorophos produces small mushrooms with caps only reaching around 3cm each! So if you were walking past these mushrooms during the day, you'd think nothing different about them. This fungus possesses bioluminescent properties, which means they glow in the dark. They're a beautiful sight; however, the bioluminescence only lasts a maximum of 72 hours. Additionally, it emits a pungent smell similar to that of ammonia. It's unique appearance and aroma makes it a popular research topic with both mycologists and biologists. The mushroom can be found growing from woody debris, for example, forest floors where fallen bark and twigs have accumulated. Because of its restricted range and short fruiting period, studying M. chlorophos can be tricky - so we still have much to learn!