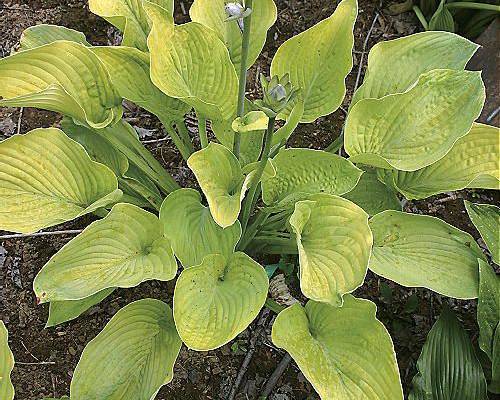 Photo by Bali-HaiMailOrderNursery (All rights reserved)

This plant has no fragrance

Hosta 'World Cup' is a hardy perennial cultivar that forms large mounds of cupped, bright gold leaves. In mid to late summer, erect stems of nodding pale purple flowers appear. All Hostas need some shade, and few will thrive in strong sunlight. A general rule is that the lighter the foliage, the brighter the sunlight that will be tolerated. Variegated varieties tend to require more sun to keep their white, light green or gold stripes. The darker, bluer varieties need more shade. They are ideal for growing in North facing aspects of your garden where most other plants would struggle. Once established, Hostas are pretty tough and will spread horizontally to make an excellent ground cover. They are suitable for most garden styles and also look good in containers (but keep well watered and watch out for vine weevil in pots!). They require little care apart from tidying up spent leaves and flowers at the end of the growing season, and preferably an autumn mulch. Also in spring, to retain moisture. Hostas like a sheltered position in moist, well-drained soil and do best in a slightly acidic growing medium, but this isn't a necessity and any good garden soil - unless very alkaline - is fine. This cultivar is a hybrid seedling developed by Doug Beilstein from Hosta 'Komodo Dragon' and Hosta 'Super Bowl' and won Hosat of the Year in 2018.

Hostas can sometimes be affected by a virus.

How to propagate Hosta 'World Cup'

Divide clumps every 4 or 5 years in late summer or early spring. Ensure each section has 1 to 3 good buds and trim away damaged roots. Replant at their original depth in the ground with the shoots just poking through the soil. Water and apply a granular feed.

Collect seeds in autumn from dry seed heads, sow in spring and place in a cold frame. Seeds are unlikely to come true.

Other uses of Hosta 'World Cup'

This fantastic foliage plant is useful for underplanting but it is equally grown in containers in urban courtyards and formal beds of cottage gardens. With an OPALS rating of 1, these plants are considered 'Good' to include in a low allergen planting scheme.