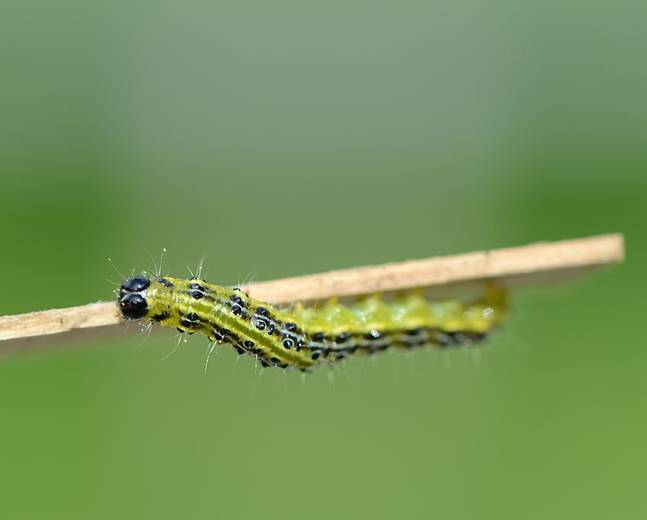 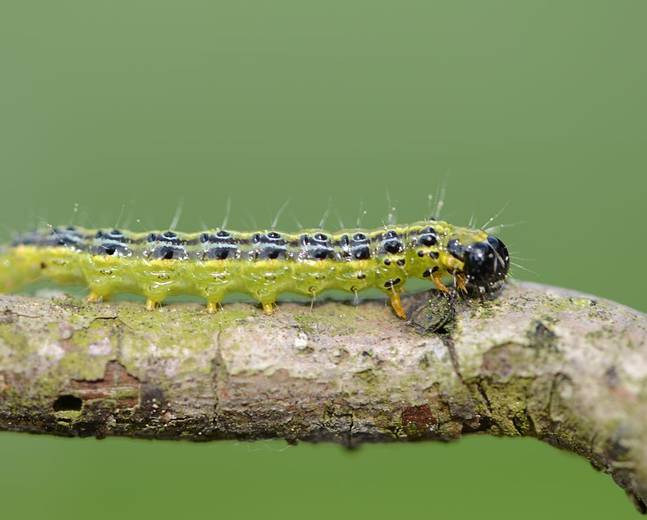 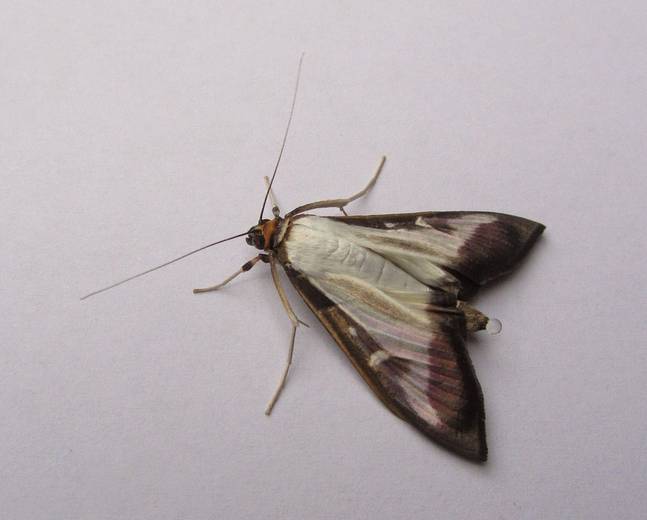 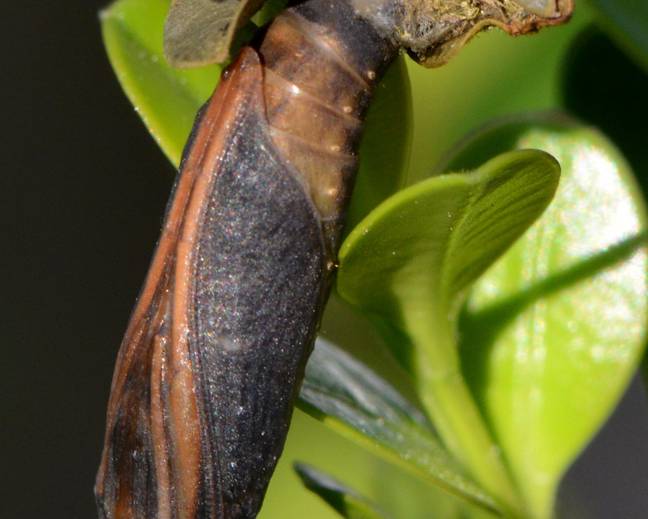 Cydalima perspectalis caterpillar by Didier Descouens (CC BY-SA 4.0)
1 of 8
The Box Tree Moth is native to south-east Asia and was first introduced to Europe in 2006. They're a distinctive moth, with triangular creamy-white wings with brown borders. There is also a melanic version, which is mostly brown, with creamy-white dots on the front wings. Box Tree Moths lay pale yellow eggs beneath the leaves of Box. Once hatched, caterpillars begin to devour the foliage, leaving behind webbing and pellets. Damage from Box Tree Moths can be easily mistaken for Box Blight. If plants are suffering from the fungal disorder Box Bight, the webbing and pellets will be absent. Likewise, Box Tree caterpillars are sometimes confused with the Large Cabbage White. Large Cabbage Whites will only be found eating Brassicas. They also possess more black markings when compared to the Box Tree Moth. The Box Tree Moth may become more invasive over time because they have few natural enemies that will predate them in their new range. In the UK, Cydalima perspectalis was first recorded in 2007. Now, it's become established across most of South England.
Free download for your phone or tablet

Can kill Box plants when caterpillars attack the main stems.

Adults: The wingspan reaches 4-5 cm. colour morphs consist of purplish-brown wings, with a white dot on each front wing. The most common form, however, is creamy-white with a brown border. Larvae: Around 1-2mm when first hatched and will reach a length of 2.5- 3.0 cm. Pupae: The pupa (cocoon) starts off green fading to brown with time. They can be found attached to Box plants. Eggs: Pale yellow to green and can be found beneath the leaves of box plants.

You can find eggs on the underside of healthy leaves. Webbing in Box plants. Insect pellets in webbing. Patchy defoliation of Box.

Europe, South East Asia and some parts of North America

Regularly monitor Box plants for bright yellow and black caterpillars. Check under leaves for cocoons. Other symptoms to look for include sudden defoliation and webbing. If infestations are severe, you can purchase pheromone traps to monitor moth numbers and help determine what treatment will be most appropriate. XenTari is a biological insecticide containing a high concentration of microorganism Bacillus thuringiensis. It's thought to be an effective control measure against Cydalima perspectalis. If infestations seem to be frequent, it might be worth choosing an alternative plant with higher resistance to pests.

Natural pyrethrins can be used to treat these caterpillars. Multiple applications may be required to maintain treatment strength. Stronger treatments include synthetic products containing active lambda-cyhalothrin, deltamethrin, and cypermethrin. Acetamiprid is the most potent insecticide available to home gardeners. It should only be used as a last resort because of its toxicity towards beneficial insects. Always read bottle instructions, and check with your local garden centre for guidance before purchasing toxic products. Make sure the products chosen are authorised for use in your region. Plants which are in flower should never be sprayed. You can get a professional to spray your box plants with pesticides such as DECIS which will last for around 5-6 weeks. 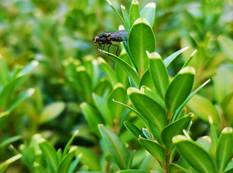